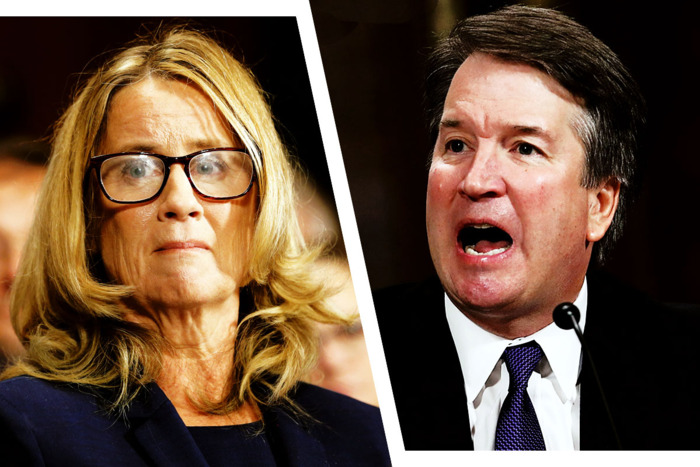 Thank you to our guest blogger, C. Marshall, for this entry.

The Dr Blasey Ford vs Judge Kavanaugh hearing is today. I listen. I try not to listen. I listen harder.  I missed most of her hearing since I was at the Day Center.  I heard more than enough and certainly saw more than his testimony.  Is it a testimony? I don’t understand which parts are legal, what is due process, and if this is even a process or if it is a peanut gallery that holds prestige in their commentary.  This is what taxes pay for? I am happy it’s happening. Or am I? Was this the way it was supposed to happen? In my gut, I don’t think so. My gut also has sucker-punched my brain today with the message CYA, CYA, CYA.

In the summer of 2005, I’m fairly sure, sometime in July, probably, at night after 10pm, I’m positive, Ben sexually assaulted me in Charlevoix, Michigan at a home in the Belvedere Club, I am certain without a nano-unit of doubt.

Ben was the first person to kiss me.  He had kissed me earlier in the summer on the back porch after I had put the 2 boys to bed. I was a nanny for a family for my 6th summer in a row.  Ben is the cousin of the 2 boys.  After the night of my first kiss, which I remember feeling utterly disappointed and rather disgusted by the slobbering and lack of tact, which I figured was the way all guys kiss, Ben and I kissed most nights for maybe a couple weeks or less. I truly do not remember those details. I do remember one night when he told me to touch his penis. I said I didn’t want to.  He said, “C’mon, just touch it, it won’t bite you.” He took my wrist and forced my hand to touch his penis inside of his shorts and underwear.  I felt a hard penis. The first thought that entered my mind was the complete shock and confusion that that human part, that touching THAT thing, was what my dad felt so inclined to do with his 17 year old client that he did just that.  Here I was feeling grossed out by a hard penis and yet, my dad had desired touching a penis so much that he touched a minor’s penis and went to jail for it. I wanted to throw up.

Ben left for a couple weeks, or more or less, again I don’t remember.  When he came back I remember feeling excited to see him.  I was at Filley’s house, another cousin of the 2 boys, but not technically cousins with Ben.  We were hanging out and I was texting Ben to come over and hang out with us.  I remember him texting that he didn’t want to and that I should go to him.  We had been living in the same home and staying in separate bedrooms. I was planning on staying at Filley’s that night though.  I decided I would walk over and convince him to come over to hang out with Filley and me.

When I went to the house, I couldn’t find him. He texted me that he was in his room.  I went upstairs and whispered to him from the door. I was afraid of waking up his dad and step-mom and the parents of the boys I was a nanny for.  He told me to come into the room. I went in and sat on the edge of the bed. I was very uncomfortable. I did not want to get caught in his room.  I remember him putting his head in my lap and then adjusting to kiss me. Then he started undoing my light blue belt I was wearing. I grabbed his wrist and tried to push it away, but he persisted and undid my belt. He was passionately kissing me and I was pulling away. I told him I didn’t want that and let’s just go to Filley’s.  He said he did want that and to let him “touch it.” I told him no. I told him no several times. He said, “C’mon, just a little touch. You’ll like it.” He pushed my torso onto the bed and put his hand inside my underwear to fondle my vagina. I didn’t scream. I was terrified of one of the adults coming in and thinking it was my fault.  I thought I could get sent home and my mom would be livid.  I thought all the adults in the Belvedere club would hear about it and I would be seen as a slut.  I was already seen as the poor charity case help.  So I kept trying to silently make him stop.  I remember holding onto his wrist pushing him away as hard as I could the entire time.  I remember him asking, “Do you like this?” I said, “No.” He said, “How about this?” And would do something else with his fingers inside of me.  I remember moving my face away so he couldn’t kiss my lips.  When he finally took his hand out, I jumped out of the bed and buttoned my jeans and fastened my belt. I remember saying some angry, sarcastic remark like, “Are you done with me now?” as I was leaving and him responding to be quiet so that I don’t wake anyone up.

I remember walking back to Filley’s and feeling so raw and exposed and weird. I didn’t fully understand what had just happened.  That night Ben and I texted and broke off whatever our teenage commitment to each other was.  I did not tell Filley what happened. I felt ashamed. The next morning I remember trying to talk to the mother of the two boys. I asked if I could talk to her about something privately.  She agreed to later in the morning, but when the time came she said she was too busy.  She did not ask what it was about or offer to reschedule. I think she was angry and sad that I was not going to nanny for them anymore, which I had told them earlier in the summer that it would be my last year due to my pay, which was about $0.26 per hour after adjusting for room and board.

After feeling rejected, I did not tell anyone about what happened until my freshman year of college in 2007.  My friend was disclosing a situation that sounded extremely similar to what happened to me.  Instead of feeling shame, I felt rage.  I was enraged about what happened to her.  I told her my experience and I realized that the actions she was calling sexual assault was the experience I had with Ben; my experience was sexual assault.  The symptoms I had since experienced began to make sense.  I would panic when my boyfriends following Ben would start to undress me and especially touch my vagina.  To this day, I experience initial anxiety when my life partner touches my vagina with his fingers.  The experience also partially shaped my young adult perception of how I was to be treated by men, by boyfriends, and in physical intimacy.  I thought men saw me as someone they can do what they want to, that boyfriends will touch me how they want and without consent, and that physical intimacy is dangerous.

The next sexual assault I experienced was in 2008 when Carl raped me at a motel in the Detroit metro area and the final one was in March 2012 when Gustavo raped me in Granada, Nicaragua. It is difficult for me to unravel what assault caused what symptom, especially considering my numerous adverse childhood experiences, and I imagine it was a combination.  What I can say with confidence is that what Ben did to me in high school was sexual assault, it was wrong, and it significantly negatively impacted my mental health and well being.

The Spiral of Healing