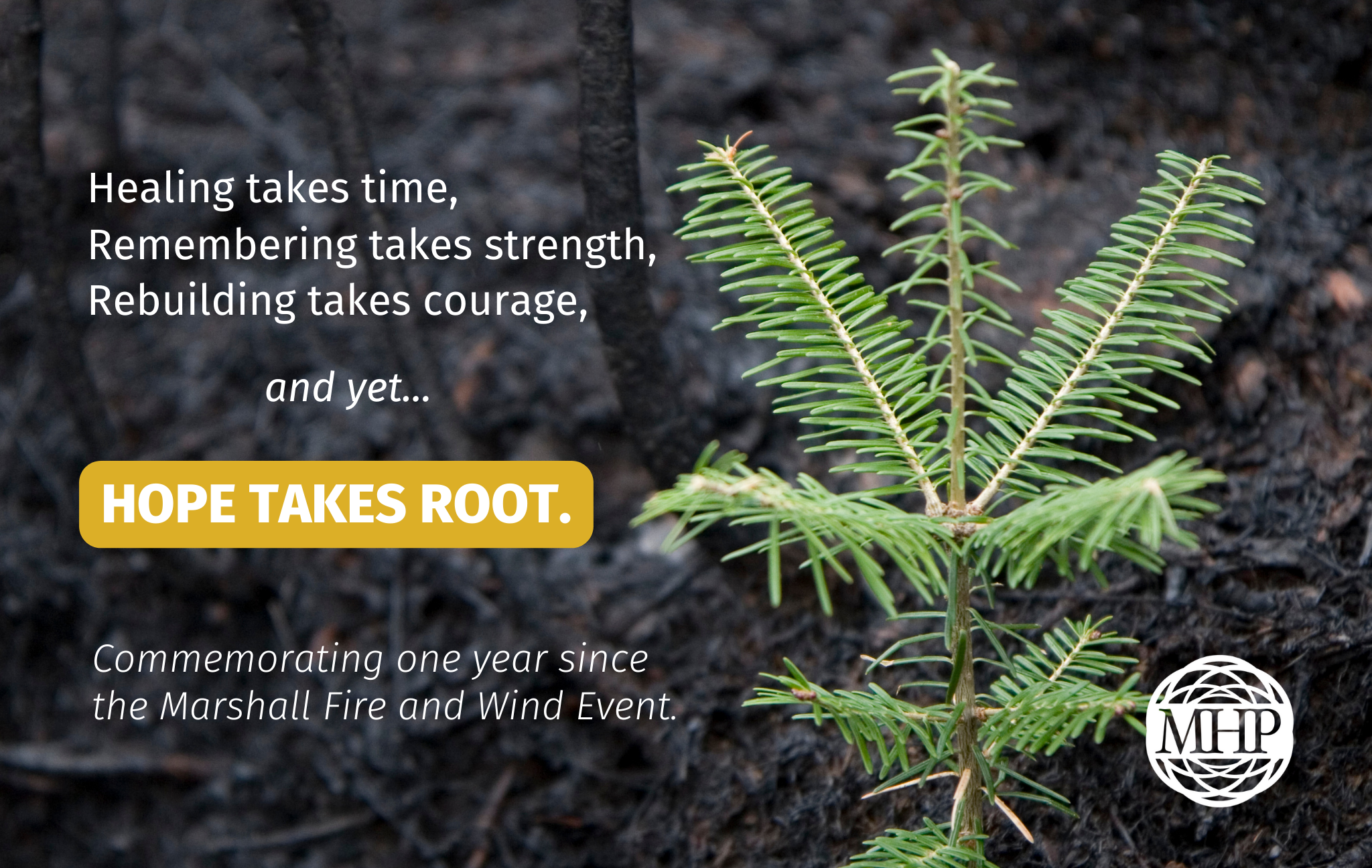 On December 30th, 2021, a fast-moving wildfire fueled by extreme winds swept through the City of Louisville, the Town of Superior, and unincorporated Boulder County, destroying and damaging over 1,000 homes and 30 commercial structures. It was Colorado’s most destructive wildfire ever in terms of property loss.

“In those hours, I truly felt like my entire identity, my past, and everything I loved was burning away in the giant firestorm as I stood watching helplessly,” said Katie Reynolds, an MHP Outreach worker and Louisville native.

Together, as we mark 1-year since the Marshall Fire and Wind Event, we recognize that some survivors may experience renewed trauma, something experts refer to as the “anniversary effect.”

What is the anniversary effect?

Using the term “anniversary” for a traumatic and devastating event such as the Marshall Fire can feel wrong, since anniversaries are often used to commemorate celebratory events like marriage or a positive milestone. But psychologists often refer to the impact of trauma anniversaries as the “anniversary effect” or “anniversary reaction.”

As Ashley Wallis wrote in our blog post on “How to Manage Trauma Anniversaries”:

“Just as you find yourself in a cyclical tradition of feeling absolutely compelled to change your hair every spring, there are times of year depression or grief sets deep into your bones.”

Around trauma anniversaries, survivors may experience several days or even weeks of enhanced anxiety, anger, grief, sadness, nightmares, flashbacks, depression, or fear. Not all survivors of a disaster or traumatic event experience the anniversary effect. But for those who do, they may not expect it or understand why they are feeling this way.

How to process trauma anniversaries in a healthy way

While the anniversary of a disaster or traumatic event can be difficult, it also provides opportunities for healing.

“As heavy as these days feel, they give us a beautiful gift—we’re given the opportunity to do some introspection and healing,” says Wallis.

She offers the following tips for what to do around trauma anniversaries:

Healing is a journey

Healing is a journey – one that looks different for each person, family, and community. While signs of regrowth and rebuilding have already begun to sprout from the ashes of the Marshall Fire, many in our community continue to struggle emotionally, psychologically, and financially.

For many individuals and families affected, the recovery process has only just begun. Some survivors put their emotional recovery on the back burner for the last year but are now seeing walls go up on their new homes, while others have been primarily addressing their emotional trauma and are only now starting the long and complicated process of rebuilding or moving on.

As Colorado’s wildfire threat grows each year, the risk of being re-traumatized by high winds, dry weather, new dangers, and evacuations increases. What’s more, some residents have reported finding ash in their attics and basements as they get out holiday decorations – a stark reminder of what they nearly lost.

Gena Leonard-Johnson, an early childhood mental health consultant for Mental Health Partners, was having a “normal day” the morning the fire erupted – that is, until she opened her front door and was greeted by smoke. She quickly grabbed her two young kids, packed a few items, and left her Louisville home in under 10 minutes.

Later that day, the Louisville police chief confirmed her worst fear. Her home was gone.

Now, a year later, Gena recently shared with the Daily Camera that “the fire is the grief that keeps on giving.” As she and her husband rebuild, Gena has thought about the fire every day since, feeling the grief and loss of her home.

According to the Daily Camera:

“[Gena] said that often, she does not realize she lost something until she reaches for it instinctively. Earlier this year, her kids suggested that they go sledding. She was excited to go, until she realized that she had no sleds or snow pants. Even small moments like that, she said, become a reminder of what her family lost.”

This time of year is particularly difficult for many survivors as every windy day is a reminder of the fire that destroyed so many homes. For Gena, she finds herself hoping and wishing for the ground to have enough moisture to prevent another wildfire from breaking out.

“It’s just a constant effort to remember that we’re gonna get through this,” Leonard said.

Responding to a community in crisis

In March 2022, Mental Health Partners launched a grant-funded initiative through our Colorado Spirit Crisis Counseling Program (CCP) to offer counseling services, crisis support, and resource navigation to those impacted by the Marshall Fire. Beyond individual meetings, this team facilitated support groups, made care packages, shared resources in community spaces like coffee shops and libraries, participated in milestone events – including the Weekend of Healing at the Louisville Recreation and Senior Center – and much more.

The CCP team also developed and maintained critical relationships with other local organizations and agencies supporting the Marshall Fire community, including:

To heal a whole community, it takes a network of partners working together to recover, rebuild, and reinvest in resilience. Recovery takes time, and we are committed to offering continued support.

Those impacted by the Marshall Fire can get support by phone (303-545-0852) or email (CommunityOutreach@mhpcolorado.org). You can also visit our Wildfire Resources page to get connected to resources.